I have watched this movie that was on DVD several times about the longest “living” robot as known as Andrew Martin.  This movie is the science-fiction family-drama and comedy about the robot’s journey as a sentient artificial life form on Earth which spanned about 200 years.  To me; it is a very heart-warming movie that even the “Borg Queen” can watch.  Well, anyway; that is another one of my fond memories about the artificial life form.

The main character, the robot, which is played by Robin William, is given the name “Andrew” by a little girl who has mistaken “Android” for Andrew.  Andrew was created in 2005 and he was operational into service by the Martin family.  He has developed creativity when he’d accidentally broken the crystal horse that belonged to Little Miss, the little girl who’d called him “Andrew”.  So he’d created a wooden horse to replace the broken crystal one as a form of restitution.

Then, Andrew was later mentored by the father of the family after the manufacturer had decided that “creativity” was a “defect” and had wanted to reprogram him.  Andrew was growing in sentience over the years and he’d broken his thumb during one of his work-working projects and he has his thumb repaired. Meanwhile as he was being repaired, Andrew’s face was upgraded to give him the likeness of the facial expression. The modification was paid for by his carpentry and other projects.  Andrew’s personality continued to grow.

Andrew was granted freedom to grown on his own as he was banished from the family home and was told to not call himself “one”.  So Andrew built the house on the beach to live alone.  He has later returned to the family home when it was learned that “Sir” the father was dying so Andrew visited him and Sir apologized to him about banishing him from the family.

Then, after some time; Andrew has gone on the quest to find other NDR robots in an effort to locate any one that has the similar growth as he has after gaining sentience.  He later encountered Galatea, an NDR with the female attributes and that led to meeting the man who was the son of the NDR robot designer.  Rupert was working to develop the human-like features of the robots thus creating an android, but unable to attract any funding and Andrew agreed to provide it. So they worked together to creating the human-like features for Andrew who later becomes an android.

Andrew met Portia as he visited the aged Little Miss who has later died of the stroke.

Andrew and Portia’s friendship has grown into romance. Despite the fact the society would not accept that Andrew would be human enough to be regarded as a “human”.  Andrew’s quest for humanity has grown long and has many twists and turns. He was rejected by the World Congress as being recognized as fully human.  Andrew feared that he would out-live all of his family and friends so he decided to ask Rupert to replace the lubricant with human blood in order to be part of the human condition, which causes the gradual decay in his brain.

Andrew has reached his 200th year when he and Portia are laying side-by-side in the intermediate care on life support. The World Congress has at last accepted and fully recognized Andrew as fully human and was given his name and his marriage to Portia was validated after Andrew had gone to World Congress a second time re-submitting his proposal to be fully recognized as such.  When Andrew’s wish and goal is at last met, he passes away and not long after Portia had asked Galatea to disconnect her from life-support so that she can re-join Andrew soon after.

Like I said, “It is a very heartwarming story” about family, sentience, and being a human individual.  As I am writing this blog entry, I have to refer to the Wikipedia article in order to jog my memory about Andrew, a bicentennial robot, an android and later a man.

We believe this is about it for now. We will return with another entry. So be efficient, everyone!!

For more information about the movie, “Bicentennial Man”. Here is the link;

An Orkan Has Come To Earth.

Here is one of those wacky comedy that is science fiction. Sometimes, one would have to take a lighter side of all the seriousness of science fiction in general.

Here is the comedy show that depicts the male humanoid alien and a human female. They come together as roommates in a house. Mork is sent to Earth in order to fit into the human society and norms.

Mork usually greet people with “Nanu-Nanu.” with the sideway “Vulcan-greeting. 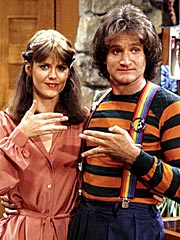 My cousin Melissa ad I used to watch this sitcom as kids. We have enjoyed Mork’s strange antics and how Mindy reacts to his unusual quirks.

There is not very many sitcoms that features any science fiction theme. Whenever I have seen a few, they were short-lived due to budget and lack of interests from audiences.

The show “Mork and Mindy” was the idea taken from the earlier science-fiction comedy My Favorite Martian.

So this is another blog entry that seems to interest me when Melissa and I used to watch this show whenever it aired on television.

Anyway; I believe this is about it for now. Or should it say “we”. 🙂

And our trek has only just begun...

A Devotion, Dreams, and Love about Ezri Dax

Who needs an alcove when there's coffee to be had. Not stubborn.

All About Hearing & Deafness

startrekblog
Collective Thoughts Of My Journey

Special Gathering, a ministry within the mentally challenged community. Our mission is evangelism and discipleship of people who are cognitively disabled.

The latest news on WordPress.com and the WordPress community.